Trinity School was founded in 1709 when William Huddleston, a New York lawyer and a city schoolmaster, successfully petitioned the London-based Society for the Propagation of the Gospel for school books and an annual salary of ten pounds. 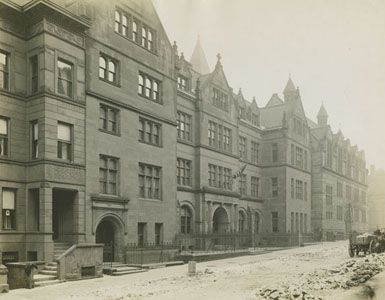 In his petition, now in the archives of Lambeth Palace in London, Huddleston wrote that the "want of a publick school in the City of New York where...poor children...might be taught gratis is the occasion of an abundance of irreligion." He proposed to provide free education for the poor in the new English Colony. The rector and wardens of Trinity Church and the mayor and aldermen of New York were enthusiastic and offered the new school classrooms in the Trinity Church bell tower and in old City Hall. The society, whose 1701 charter under King William called for it to "found schools everywhere," agreed to fund Huddleston's school, provided only that the mayor and aldermen certify to London annually the presence of forty poor children at the school, and so each year the mayor and aldermen in colonial New York visited the school to compile class lists which were then sent to the society in London. Today these colonial class lists can be found at Oxford University's Bodleian Library. At its founding Trinity School was a charity school, a not uncommon origin for some of today's oldest and most prestigious schools. Most children in the early 18th century were educated at home; only the poor needed a special institution to act in loco parentis.
Trinity School was the only New York school to operate unhindered during the British occupation of the city in the Revolutionary War. After the Revolution, however, the School underwent major changes, which transformed it into the institution it is today. Ties to England were cut by the Revolution and so the school needed a new financial benefactor. Trinity Church provided a portion of the money. Additional money came from the Common Council of the City of New York. In the early years of the new Republic, public support shifted from the sectarian charity schools to the newly established Free School Society, with its vision of non-sectarian, universal, free public education. By 1825 New York City withdrew all financial support from church charity schools. Lacking such assistance, Trinity School, which had fought these changes, reincorporated as a private school, redefining its purpose and taking up its role as a college preparatory school.
On December 20, 1859, Trinity celebrated its 150th anniversary with a special ceremony at Trinity Chapel. At that service the school unveiled a jubilee shield with the motto "Labore et Virtute" which had been designed for the occasion. The Reverend John McVickar, professor at Columbia College, delivered the anniversary discourse. He traced the history of "old Trinity," dedicated it to the "rightful training of our rising youth, of our city's and country's coming rulers" and pointed to the large endowment which would soon become remunerative and raise Trinity School to the level of such English establishments as Harrow, Eton, Westminster and Winchester. The transition from charity school to an institution modeled on the finest English educational foundations was completed.
By the late 1880's the school's endowment was large enough to allow the trustees to begin a major expansion. Several lots were purchased on West 91st Street and a handsome new school building took its place alongside the town houses of the well-to-do on Manhattan's Upper West Side. The size of the student body was increased by over 90 percent in 1895 and construction was also begun on a girls' school, Saint Agatha's, at West End Avenue and 87th Street. In addition, the school found money enough to be true to its charity school origins and offer generous financial assistance to those in need.
The growth of Trinity was steady, both in plant and numbers, during the first seventy years of this century. The growth was bold and dramatic in the late 1960's and early 1970's. The student body grew from 417 to 589, co-education was introduced in the Upper School, and the new Hawley wing of the school was opened for classes.
During the period 1975-1986, an arts pavilion and a theater were added to the plant, and the school began co-education in the Lower School, starting with Kindergarten. All grades at Trinity are now co-educational. During the 1984-85 academic year, Trinity celebrated its 275th anniversary and saw an enrollment of 860 students, the highest in the school's history.
In recent years, attention has been focused on keeping the academic standards of Trinity high and the financial health of the school robust in a time of shrinking resources. Trinity graduates are now widely recognized as well-prepared academically, and the school's budget is balanced. In June of 1998, the school completed a $20 million capital campaign, historic in its scope and permitting the building of a new middle school and two gymnasiums, which were dedicated in the fall of 1999.
During the 2008-2009 academic year, Trinity celebrated its 300th Anniversary, marking over three centuries of challenge and achievement.

139 West 91st Street | New York, NY 10024-1326 | (212) 873-1650
Located on the Upper West Side of New York City, Trinity School is a college preparatory, coeducational independent school for grades K-12. Since 1709, Trinity has provided a world-class education to its students with rigorous academics and outstanding programs in athletics, the arts, peer leadership, and global travel.